I have been mapping historic French LA for 8.5 years.

It's harder than it looks. Among the many, MANY changes to the street grid, the intersection of Alameda and Aliso was erased, with Aliso rerouted into Commercial at Alameda Street in the 1950s to accommodate the 101 Freeway.

I get a lot of questions about this, and I think it's easier to explain with maps.
Aliso Street always had a bend in it - now it's more of a long diagonal. Here we see, from top to bottom, Main, Los Angeles, and Alameda Streets intersecting with Aliso. This is from 1894. 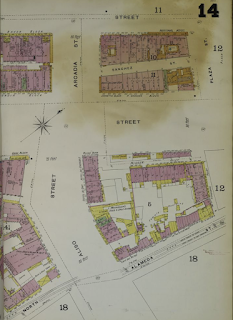 As you can see, Aliso and Commercial Streets are still parallel (and would be for about another 60 years), and Frenchtown still had plenty of houses. 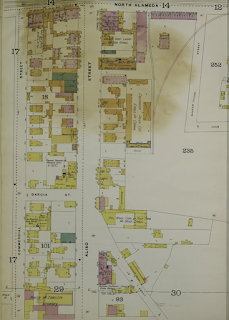 This 1894 map detail shows the Maier and Zobelein brewery, formerly the El Aliso winery, in the bottom left corner. By this point, Jean-Louis Vignes' vineyard (formerly ground zero for the French community in LA) had been thoroughly developed into a mostly-residential neighborhood, and was still full of French residents like the Ducommuns, the Lazards, and Joseph Mascarel (who died in his Lazard Street home just a few years after this map was made). Maier and Zobelein was rebranded as Brew 102 in the 1940s, with the brewery tanks easily visible from the freeway and in photos.

Zoom in and you can see that Ducommun Street (misspelled here as "Ducummen") and Lazard Street were once two separate streets. Today, it's all Ducommun and it no longer reaches all the way to Alameda Street. 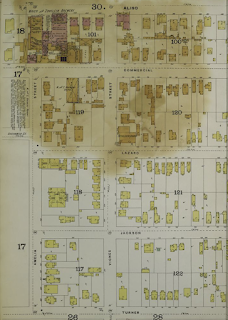 Republished in 1923, this map detail shows Aliso and Commercial are still parallel. Lazard Street is now Ducommun, which may be related to the fact that Ducommun Industries was, by then, headquartered along Ducommun Street (a bus parking facility now occupies the old Ducommun Yard). 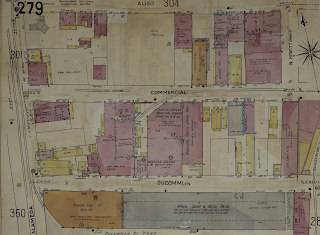 North of Aliso, Marchesseault, Apablaza, Napier, and Juan Streets still existed in 1923, although multiple corrections to this map (originally published in 1906) show Old Chinatown/Little Paree gradually being torn down. Today, this is Union Station, the Metropolitan Water District, a park, and (what else...) a parking lot. 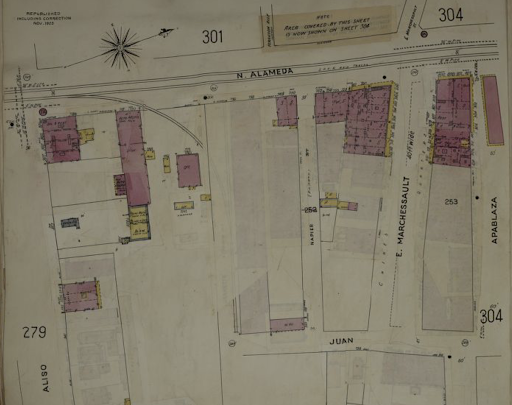 This revision, added in December 1937, shows Union Station in place of Old Chinatown/Little Paree, and shows the rerouting of Bauchet Street and the disappearance of Marchesseault Street (renamed East Sunset Boulevard). A local Chinatown historian once told me that if you could walk Marchesseault Street today, you'd more or less be walking into Union Station's front door. 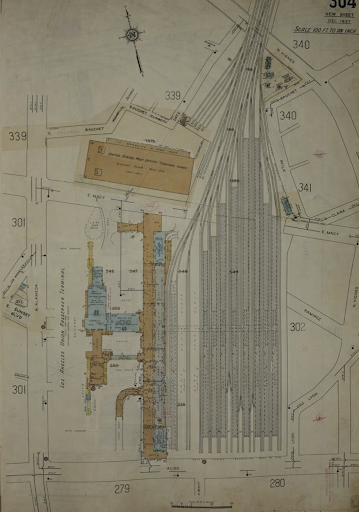 Venturing northeast to where Frenchtown, the Plaza, and Old Chinatown formerly collided, we can see that Sanchez Street used to be longer. The Jennette Block, which housed the Hotel du Lion d'Or and the Hotel de Paris at different times, is now gone, along with the western wing of the Garnier Block. (The Garnier Block houses the Chinese American Museum, and ironically now needs to be expanded because too much of the building was lopped off in 1953 and the Museum needs more space. Oh, the irony.) Note that the Pico House is still called the National Hotel here. 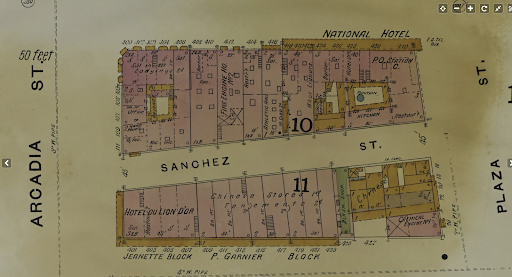 This map is from 1953. Here we see one-third of Sanchez Street missing - lost to the 101 (Hollywood) Freeway. Today, Arcadia Street stands between Sanchez and the freeway and Market no longer exists. Look for the words "being dismantled" - much of what is still shown was gone within five years. 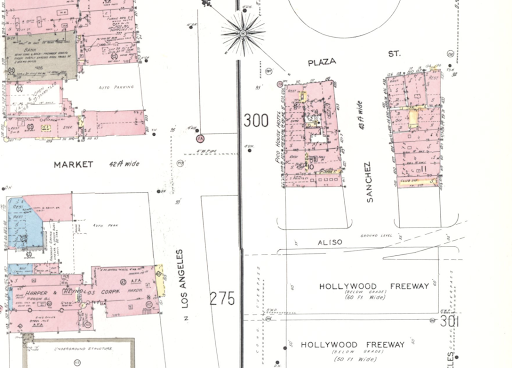 One more snippet from 1953 - this is closer to today's street grid, except widening of the freeway bumped this section of Aliso further south. El Aliso (the tree itself, not the winery where it stood) was about where Vignes Street dead-ends at Commercial Street today (and, again, this section is now Commercial Street).

Want to see the current street grid laid out over the old one? Wikimedia’s got you covered. (While I firmly believe that Wikipedia is unreliable and should not be used for serious research, this map corresponds with what you’ll see in old maps of LA.)
When the original street grid has been altered to this extent, mapping French LA is a bigger challenge than everyone thinks it is. On top of that, LA added numbering fairly late. I do still plan to reveal the Great Big Map of French LA someday; I'm just not sure when (or if) I'll ever be "done" enough.
Posted by C.C. de Vere at 12:26 PM