The Frenchmen of the Pico House 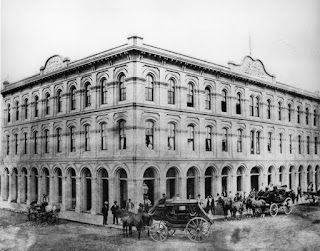 Every Los Angeles local knows who Pio Pico was.

Most are aware of the Pico House Hotel, which (miraculously) has survived to the present day.

Virtually nobody is aware that multiple Frenchmen plied various trades at the Pico House.

Construction on the Pico House began in 1869 and finished in 1870. By then, Pio Pico had led quite a life - last Mexican governor of Alta California, rancher, and entrepreneur. The Pico House, built opposite the Plaza, was by far the most lavish hotel in Los Angeles at the time (Remi Nadeau would later build a hotel that would make the Pico House look like a farmhouse, but that's a story for a future entry).

Southern California's very first drugstore, owned by one A. Chevalier, initially stood in a building across the street (probably the Signoret building; at least one surviving photo suggests a pharmacy onsite), and was later moved to the ground floor of the Pico House. (Why not? Travelers get sick and injured too.)

Most good-sized hotels have at least one restaurant, and the Pico House was no exception. In a clear sign of the times (remember, Los Angeles was about 20% French by the 1860s), the restaurant featured French food, French-language menus, and a maitre d' known as "French Charlie" Laugier.

Gov. Pico was having financial problems by the late 1870s, and lost the hotel to the San Francisco Savings and Loan Company.  The hotel changed hands a few more times.

By the 1890s, Pico House had been renamed the National Hotel and was owned by Pascale Ballade.

When the French Republic celebrated its 100th anniversary in 1892, French Angelenos paraded from Aliso Street to the Plaza. But the celebration really went into high gear at the Pico House/National Hotel, which hosted an extravagant banquet and ball.

Owner Pascal Ballade, born in France in 1838, had arrived in Los Angeles in 1860. He founded the Hotel des Pyrénées, Los Angeles' largest boarding house. The Hotel stood at 300-302 Aliso Street, held up to 1,000 guests at a time, and catered to newly-arrived French Basques - so much so, in fact, that it held weekly jeu de paume (handball) competitions attracting players from all over the USA.

Ballade also owned a combination grocery/liquor store (in the 1880s, he lived above the shop). Perhaps not surprisingly, he also owned two saloons (one at 700 Olive Street and another at 742 S. Main). On top of those responsibilities, he was a City Councilman, belonged to the Golden Rule Lodge and La Fraternité (a Knights of Pythias chapter which seems to have been composed entirely of French Angelenos), and had a sheep ranch in San Juan Capistrano.

Ballade and his wife Marie (who was also from France) had three children - John (sometimes recorded as "Juan"), Marie, and Antoinette. The Ballades and their daughter Antoinette are buried at Calvary Cemetery (Marie married into the Royére family and is buried in their plot at Angelus Rosedale; I have been unable to locate a gravesite for John).

The 1900 census indicates that the Ballade family had boarders - one of whom was Edward Naud Jr. He was of French parentage, and you'll read more about him later.

It isn't clear when the Ballades sold the Pico House, but Pascal did pass away in 1904, not too long after the business district moved further away, leading to the neighborhood's decline. I am sure the Ballade family would have sold it with no regrets at that point. The State of California has owned the Pico House since 1953.

It is interesting to note that Felix Signoret's business block stood opposite Pico House. Like Ballade, Signoret took in boarders and owned a saloon, held down a regular job as well, and was a City Councilman. Signoret was also the leader of the lynch mob that finally took down Michel Lachenais in 1870...and the Pico House is VERY close to the site of the Chinese Massacre of 1871.

The Pico House itself hosted a temporary exhibition on Los Angeles' lost French community from December 3, 2007 to January 13, 2008. Pioneers and Entrepreneurs: French Immigrants in the Making of L.A. 1827-1927 was presented by the nonprofit foundation FLAX (France Los Angeles eXchange), with the support of the French Consulate. Although the exhibition lasted less than six weeks, an accompanying book was published (I did find one factual error, but the book is nonetheless an excellent primer on LA's forgotten French colony). What are you waiting for? Go read it!
Posted by C.C. de Vere at 1:18 AM