You probably didn't know this (almost no one does), and you may not believe it. But as with the oldest parts of Los Angeles proper, our names are right there on the street grid. And thankfully, these streets haven't been renamed or erased from existence (i.e. Marchesseault Street, Leonis Street downtown, Sainsevain Street, Sentous Street, Montreal Street...).

(Note: I'm including Whittier in this entry because the Pellissier family's dairy straddled modern-day Whittier and Industry, which are right next to each other.)

A very special merci beaucoup to Greater Los Angeles Area Mensa for inviting me to talk about my people for an hour, and to the StaRGazing 2018 attendees who came to my presentation.

While prepping for StaRGazing, I had some inquiries about whether it would be taped. Well...I tried. I really did. The friend who was supposed to tape my presentation had a personal emergency and couldn't come. So I set up my phone to tape the presentation. It cut off the Q&A at the end, and just like last year, my 8-year-old laptop stubbornly refuses to upload the file. (Even the Genius Bar can't help me with this aging bucket of bolts.)

I do have another presentation coming up in May (with the Los Angeles Visionaries Association) - more on that later. In the meantime, I'm looking into live-streaming smaller, "bite size" history lessons on Youtube.
Posted by C.C. de Vere at 11:28 PM No comments:

As I've mentioned a few times over the last few months, I'm speaking at StaRGazing 2018, Greater Los Angeles Area Mensa's annual Regional Gathering. I'm scheduled for 3:15-4:30pm on Saturday, February 17. See you in San Pedro! (If you want to come, this Thursday, February 8, is the LAST day for online registration. If you're seeing this a little late, you can register in person at the RG, but you'll need to bring cash or a check.)

Can't make it to the RG? I'll be doing another LAVA Sunday Salon and walking tour in the spring, and will be re-tooling my "Frenchtown 101" talk from last September (we'll be visiting a different part of downtown). Sunday Salons are free and open to the public, but as space is limited (my previous salon sold out), RSVPs are required. Watch this space for more information...

Two Cartes de Visite. Three Possible Mayors. Who is Who?

For years, it was assumed that no pictures of Mayor Damien Marchesseault had survived to the present day. Recently, I broke the news that a surviving carte de visite identified the man depicted on its front as the forgotten Mayor.

The Workman and Temple Family Homestead Museum, which owns the carte de visite, owns another carte de visite labeled "Mayor of Los Angeles, 1860" with no name.

Museum director Paul Spitzzeri, who kindly allowed me to view both cartes de visite recently, mentioned to me that, of course, LA had two Mayors during the year 1860 - Damien Marchesseault and Henry Mellus - and that the man in the mystery picture was definitely not Henry Mellus.

Technically, Los Angeles had three Mayors in 1860 - Marchesseault, Mellus, and (after Mellus died in office) Wallace Woodworth, who served as Acting Mayor for two weeks before Marchesseault again assumed the office. Could he be the mystery man? 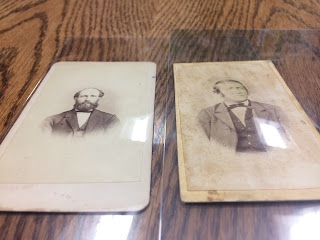 On seeing the picture on the right, identified as Damien Marchesseault, my mother commented that he resembled her French Canadian grandfather. The mystery mayor on the left doesn't appear to have any French features (although, to be perfectly fair, I am not a forensic anthropologist).

The man on the left can't be Henry Mellus. But, I don't believe he is Damien Marchesseault. Could he be Wallace Woodworth? Hopefully, someone out there has a picture of Woodworth that could either prove or disprove this possibility.
Posted by C.C. de Vere at 9:38 PM 2 comments: