Hang In There, Joan*

How do you make a nerdy history blogger panic? Make her favorite landmark disappear.

A couple of days ago, I reported that the Jeanne d'Arc statue that has stood outside the French Hospital since 1964 had been removed.

An overlooked statue without any historic/cultural monument status, representing a little-known, largely-vanished community, outside a defunct hospital facility. Those are not promising odds. Those are especially not promising odds in Los Angeles, which is notorious for eating its own history on a regular basis.

Would poor Jeanne end up in a scrap heap? Would she be dumped and forgotten in a cavernous warehouse like the one at the end of Raiders of the Lost Ark? For three days, I couldn't stop worrying about her.

I am relieved to report that although Jeanne has been removed from the site she occupied for 54 years, she is safe.

Some of the information I have requested is very likely to take at least a couple of weeks to make its way to me. But I'll share what I do know.

The French Benevolent Society, which retained ownership of the land underneath the hospital when it became Pacific Alliance Medical Center, recently sold the entire site.** Presumably, the new owners had no use for Jeanne.

I reached out to the FBS' representative in the sale. I was told that the statue had been donated to Children's Hospital.

I contacted Children's Hospital to confirm this. They don't yet have any plans for Jeanne, but did confirm that they have the statue and will keep me posted.

Hang in there, Jeanne. We'll see you again, old friend.

*Yes, that was a Frozen reference. My blog, my rules.

One French national hero. Female, age 54. Approximately 10 feet tall including the base. Last seen in front of the former French Hospital in Los Angeles. 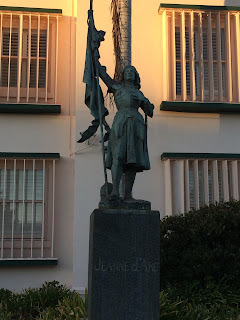 This blog began when I found a seemingly out-of-place statue of Jeanne d'Arc on Google Maps while searching for a long-lost Chinatown restaurant.

The French Hospital was the first of well over 400 French-associated sites I have plotted on a Google map. Jeanne d'Arc has stood guard outside since July 1964. This blog would not exist without her.

And now she is missing.

Regular reader Jérome reached out to let me know about Jeanne's disappearance. I don't go downtown very often, so I have no idea when she vanished.

When the French Benevolent Society sold the hospital building in 1989, it retained ownership of the land on which the hospital sits. I found a mailing address for them, although I don't know how current it is, and I have sent them a letter. Hopefully it's the right address and hopefully they respond.

Someone, somewhere, knows where she is. If you are that person, PLEASE TELL ME. If you know anything at all, PLEASE TELL ME. Comment below, or email losfrangeles at gmail dot com. I can't stand the thought of Jeanne vanishing forever. She was one of the last remaining scraps of Frenchtown and now she's disappeared too.

Many of the people who have moved to Los Angeles over the years were in search of a new opportunity, or at least a fresh start.

Dehail was born in Orne, Basse-Normandie, in 1848. Like all other able-bodied French men of the time, he began compulsory military service at age 18 in 1866. While he was away, his mother died.

The Franco-Prussian War broke out in 1870. Dehail was taken prisoner twice during the war and later court-martialed when he disappeared for a few days and was unable to explain the absence. When he was finally able to return home, he discovered his father had died.

In 1874, Dehail boarded a ship to New York. The ship sank, taking all of Dehail's money and belongings with it.

Dehail married Alice Ferendon (who was born in Illinois to French parents) in 1878, moved to Leadville, Colorado, and went into the meat business with a partner. Unfortunately, the firm of Wilbraham & Dehail was located at 109-111 Chestnut Street. Most of that side of the street, for almost an entire block, was destroyed in a fire in 1882.

The Dehails didn't leave Colorado right away - Ildevert became a U.S. citizen there in 1886. But a year later, the Dehails had started over in Los Angeles with Alice running a boarding house and Ildevert working as a painter. Dehail House stood on 1st Street in what is now Little Tokyo (at the time, it was on the edge of the oldest part of Frenchtown).* Ildevert seems to have given up painting to join his wife in the lodging business within a year of arriving. Census and voter records indicate that Ildevert went on to become a real estate speculator and building contractor. He passed away in San Francisco in 1918, and is buried in Forest Lawn (Glendale) alongside Alice, who outlived him by nine years.

Le Guide claims that many of Dehail's buildings in Los Angeles, San Francisco, and San Diego were still standing. Since the book was published in 1932, and since Los Angeles County's building records only go back to 1905 (when they exist at all), I can't say for certain if any of Dehail's buildings are still standing in 2018, a full century after his death. If nothing else, the Dehails' streak of misfortunes seems to have ended when they moved to LA.

*On a personal note, although I am well aware of how much has been demolished, redeveloped, and forgotten, I am always surprised to find yet another Frenchtown site in a familiar part of LA. I know that part of Little Tokyo pretty well and my jaw STILL dropped at the thought of a French-owned boarding house a stone's throw from the Space Shuttle Challenger monument.
Posted by C.C. de Vere at 1:42 AM 1 comment: