Whatever Happened to the French Benevolent Society? (Part 2)

For two and a half years, I have been trying to unravel the mystery of what happened to the French Benevolent Society. Read Part 1 here.

Most sources refer to the entity that founded the former French Hospital simply as the French Benevolent Society. In one of my older books, the French version of the FBS' name - Societé Française de Bienfaisance Mutuelle de Los Angeles - appears, interchangeably with its English counterpart.

Thanks to one of my readers (beret-tip to James Lawson, again), I found out that Societé Française de Bienfaisance Mutuelle de Los Angeles is, or was, technically a separate organization. And it was the legal owner of the French Hospital site.

I know very little about the business end of nonprofit organizations, so I'm a little out of my element here. Bear with me, I'm trying.

There is a little information out there on the Societé Française de Bienfaisance Mutuelle de Los Angeles, but again, it's left me with more questions than answers.

The Societé Française de Bienfaisance Mutuelle de Los Angeles' address is identical to the FBS' address. I sent a letter to that address two months ago, via certified mail. I have never received a response, and the tracking number doesn't work on USPS' website. Presumably, the address has been defunct for some time. I'm guessing neither entity elected to have mail forwarded to a new address, either. Which seems really strange, since property sales often have straggling bits of paperwork to finish. (I'm a notary. I handle property transfers frequently, so I know this from personal experience.)

I'm no expert, but the Societé's income-to-expenses ratio seems unusually high. See for yourself. If this were a balance sheet for a publicly traded company, I doubt I would be buying the stock.

There is/was some investment income...but from what? And where has it gone all these years? Is there a forensic accountant in the house?

What happened to the Societé/FBS' charitable spirit? Zero charities supported and zero dollars donated (at least in 2014)? Really? Someone please tell me there's more to the story.

The Societé/FBS sure has shrunk (except for its income...). At least as late as 2014, there was still a nine-member board (a tradition dating to 1860). But only two employees? And apparently NO members (since there were no membership fees collected, going back at least as far as 2002)? Somewhere in the great beyond, Louis Sentous Jr. is quietly crying into a glass of Georges Le Mesnager's best wine.

I may finally have a usable lead. I have an address and I am going to try sending another letter. Who knows, I may finally get a response.

Whatever Happened to the French Benevolent Society? (Part 1)

Since then, I have come into contact with quite a few history buffs, preservationists, and French Southern Californians. I have been asked, plenty of times, if I've ever reached out to the French Benevolent Society, the entity responsible for the alpha and omega of this blog - the French Hospital and its Jeanne d'Arc statue.

I tried. Dear readers, I swear to you that I tried. And I have the certified mail receipts to prove it.

When the old French Hospital was sold again, I was able to track down Jeanne d'Arc within a few days. Tracking down the property's longtime owners, the French Benevolent Society, has been a very different story.

Internet searches for the French Benevolent Society didn't yield a website, directory listing, or contact information. It did, however, lead me to the California Secretary of State's website, which allows users to access some information on business and nonprofit entities.

A search for the FBS yielded two results: the French Benevolent Society of California and the French Hospital Benevolent Fund of Los Angeles. Both entities had their corporate status listed as "suspended".

There had to be more information. I ran a small business; I know from experience that they generate a paper trail. Logically, a bigger, older corporation had to have more information floating around out there somewhere.

I submitted a request for ALL of the filings the Secretary of State had for both entities. That went surprisingly well*. The Secretary of State's office fulfilled my requests pretty quickly, and even gave me a courtesy phone call to let me know there would be a delay on the French Hospital Benevolent Fund's filings because they'd been moved to archives long ago.

In the end, there wasn't much paperwork on either entity, and what I do have raised more questions than it answered.

The French Benevolent Society, founded in 1860, became a corporation in 1959. It was granted tax-exempt status by the Franchise Tax Board on the grounds that it was a social welfare organization. Okay, fine, that seems pretty normal.

The only other document on file for the FBS was a Certificate of Status indicating that "...the California Franchise Tax Board suspended the entity's powers, rights and privileges on April 03, 1972, pursuant to the provisions of the California Revenue and Taxation Code..."

Both the French Benevolent Society of California and the French Hospital Benevolent Fund had their "powers, rights, and privileges" suspended on the same day - April 3, 1972 - "pursuant to the provisions of the California Revenue and Taxation Code".

While this was going on, I found a physical address in Chinatown for the French Benevolent Society and sent them a letter, asking if I could interview someone from the organization for this blog. I sent the letter via certified mail, enclosing a self-addressed, metered envelope with a certified mail label already attached (I also included my email address and phone number). I wanted to reduce the risk of my letter getting "lost in the mail" as much as possible, and certification does help with that.

Whenever I try to track either certified mail label number, I get an error message. From considerable experience in dealing with the post office, I'd wager my letter is sitting in a dead letter office (I sent it nearly two months ago, so if it were going to be returned to sender, it should have made its way back to me by now).

It's very hard to provide answers on this blog when you can't get anyone to answer your questions. I have a few theories, but since I can't prove or disprove them, I won't share them at this point.

Especially since I now have more questions than when I started.

Why were there TWO corporate entities attached to a single hospital facility? I understand major corporations being made up of several smaller ones, but this was ONE hospital, in a city that was sizable but nowhere near as big as it is now (and not many people lived downtown in the postwar era).

Why did BOTH entities have their "rights, powers, and privileges" suspended? Why was it on the same day? This is why I, a few entries ago, asked if any of my readers had a legal background. I had hoped that someone who understands business law and/or tax law might be able to offer some insight. As for the shared date, I don't believe in coincidences.

Both suspensions dated to 1972. How, exactly, does a suspended business entity manage to keep a working hospital open until 1989 - an additional 17 YEARS? This is what baffles me the most. It doesn't make any sense at all. Knowing that the hospital's 125th anniversary party in 1985 was a big public event that featured a presentation from then-Mayor Tom Bradley just makes this even weirder.

What, exactly, has the FBS been doing since the hospital changed hands in 1989? The FBS was concerned with the public good, regularly holding fundraisers and an annual picnic. In recent years, its name has only been in the newspaper in regards to the hospital's closure and sale.

What, exactly, happened to the $33 MILLION dollars that the FBS made selling off the hospital site? Obviously, $33 million is a LOT of money. It can't have vanished into thin air.

If someone from the French Benevolent Society sees this, PLEASE contact me so I can get your side of the story. I promise there will be no tricks, judgment, or aggressive tactics. I'm not an investigative reporter, I'm a nerd with a blog. I just want to know what happened.

*I'm a notary. The California Secretary of State is technically my boss. After some negative experiences dealing with various government offices over the years, I was quite proud to be connected to one that did something right!
Posted by C.C. de Vere at 12:25 AM No comments: 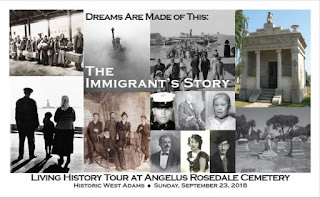 Recently, I was contacted by the West Adams Heritage Association regarding their annual Living History Tour of Angelus Rosedale Cemetery.

This year's tour theme is The Immigrant's Story. Several noteworthy French Angelenos are interred at Angelus Rosedale, and I was honored to provide my input on Jean-Louis Sainsevain for this year's tour.

If you live in West Adams, check your recent WAHA newsletters...you just might find a biography of Sainsevain's ill-fated business partner, Damien Marchesseault, first published here by yours truly and reprinted with my permission.

Get your tickets now for tours on Sunday, September 23. If you take one of the midday tours and see a pale brunette with a guillotine-blade necklace, come say hi!

Los Angeles was far from the only place in the United States to have its own French settlement.

The cities of St. Louis, Detroit, Green Bay, Mobile, and Biloxi were founded by French settlers (if I'm forgetting any, please comment below). There was a French settlement in Florida. Louisiana's French roots run even deeper than my hatred of ketchup.

Oh, and if you're ever in Walla Walla, Washington, you can visit the Frenchtown Historic Site.

Robert Foxcurran, one of my readers who lives in Seattle, asked me to send this poster for the upcoming Frenchtown Rendezvous to any interested parties. I don't know anyone else with ties to the Pacific Northwest, so I'm giving it a signal boost here instead. Please send this to anyone who might want to attend (October 6 in Walla Walla, WA). I had to shrink and screenshot the poster to insert it, so if anyone wants the full-size version, email losfrangeles (at) gmail (dot) com and I'll forward you the original file. 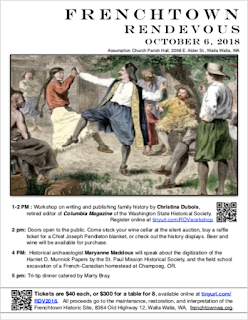 Genealogy geeks take note: there will be a workshop on writing family histories. A separate registration is required (buy Rendezvous tickets here). And don't forget: check the weather before you go. Apparently Washington has something called "rain".
Posted by C.C. de Vere at 1:16 AM No comments: