I realize this blog doesn't have a strictly linear timeline. Sometimes, one location will have a story spanning centuries; sometimes several generations of one family will have so many accomplishments that it makes no sense to split them up by date.

Also, the calendar sometimes encourages a change of plans.

I promise I will write a post about Judge Julius Brousseau soon. In honor of International Women's Day, today's post recalls one of the judge's four children: Dr. Kate Brousseau.

Kate Brousseau was born in Ypsilanti, Michigan on April 24, 1862. Her father, Julius, was born in New York to French Canadian parents; her mother Caroline (née Yakeley) was of German and English extraction. The Brousseau family moved to Los Angeles in 1877.

Kate enrolled in Los Angeles High School. But she wasn't done learning when she graduated. Not by a LONG shot.

Kate enrolled at the State Normal School (now known as UCLA). At the time, the university's campus was located on the present site of Central Library.

When she was about twenty years old, Kate began her teaching career, offering private French lessons for 75 cents each (50 cents per person for groups of 3 or 4) in the Brousseau family mansion at 238 South Bunker Hill Avenue.

Kate returned to the State Normal School in 1891, this time as a French professor. She often translated French literature for the Los Angeles Times. But there were far better things in store for that brilliant bilingual mind of hers.

She returned to the University of Paris, this time earning a Ph.D in psychology in 1904. Her doctoral thesis, which concerned the education of African American children, can be read here in French (do note that she dedicated the book in part to Dr. Hubert Nadeau). In 1907, Dr. Brousseau became Professor of Psychology at Mills College in Oakland. Her specialty, little understood at the time, came to be called abnormal psychology. In time, she became head of the Department of Philosophy and Political Science.

Perhaps unsurprisingly, Kate was a suffragette. She was one of eight directors of the College Equal Suffrage League of Northern California, elected in 1911.

From 1914 to 1915, Dr. Brousseau conducted a psychological survey of the inmates at the Sonoma State Home for the Feebleminded, giving psychological examinations to about 1400 developmentally disabled children. At a time when such children were widely considered an embarrassment or a burden, Dr. Brousseau sought to understand their minds.

In 1917, with World War One raging, Dr. Brousseau left to assist the American Fund for the French Wounded, serving with the French Army (she was 55 years old at this point - I wonder if she knew Georges Le Mesnager!). She served as directrice des Foyers du Soldat ("director of soldiers' footsteps") on the front in Lorraine, then served with the French Army of Occupation in both Germany and war-torn areas of northern France. She put that Ph.D. in psychology to work rehabilitating traumatized soldiers after the war's end, and assisted the famed surgeon Dr. E. Toulouse in examining French women called into war service (as factory workers, railway employees, and other traditionally masculine jobs) in Paris. For her services to France, the French minister of war awarded her the Medaille Commemorative Francaise de la Grand Guerre.

Dr. Brousseau had some close calls during the war, which she related to her colleagues in letters. Before her steamer even reached France, a German submarine attacked, deploying a torpedo. Fortunately, gunners on board the ship hit the submarine. Dr. Brousseau was aware that she was in danger, but stated that she was more angry than afraid. Until the ship docked, the lifeboats were stocked with emergency supplies - just in case. A couple of months later, while serving in Paris, Dr. Brousseau was caught up in a zeppelin raid. She also wrote of the suffering experienced by French civilians - families living in basements, a child killed by a bomb while playing, German soldiers kidnapping a mother and her daughters. Still, she ended on a hopeful note, writing of the many American college students (including a group of young women from Smith College) who had volunteered to restore and rebuild villages and towns ravaged by bombs, and noting that the American army had arrived.

The Oakland city directory continued to list Dr. Brousseau as a Mills College professor during her absence. (The college, realizing her extensive education, expertise in psychology, and French fluency made her a valuable asset to war-torn France, kindly granted her a leave of absence.)

The professor returned to her teaching career at Mills College in 1919. During this time, she published additional books on race and education, and created a course in marriage and family living about fifteen years before other colleges saw the need for one. In 1925, Dr. Brousseau created "a psychological clinic for the diagnosis and treatment of problem cases in the Oakland public school system" (layman's terms: she taught schools how to help troubled kids). She did not retire until 1928.

Despite extensive travels and living in Oakland for the bulk of her career, Kate kept close ties to Los Angeles, and returned when she retired. In 1930, Dr. Brousseau was one of four former students who arranged a memorial service for Chloe Blakeman Jones, a Los Angeles High School teacher who had passed away.

Dr. Kate Brousseau passed away in 1938 and is buried at Evergreen Cemetery. There will never be anyone else quite like her.
Posted by C.C. de Vere at 1:29 AM 1 comment:

Raymond Alexandre and the Roundhouse

Continuing the theme of French sailors who settled in Los Angeles... 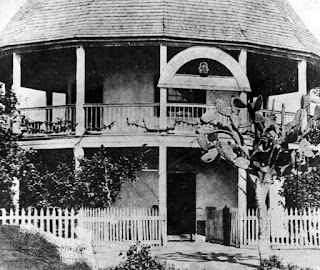 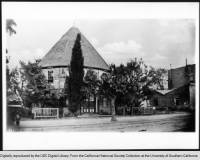 Raymond Alexandre was a sailor, born in France but well-traveled. (His rank and exact birthplace seem to be lost to history.) Alexandre was an early French arrival, landing in town before 1850, and kept a saloon near Requena Street (where Harris Newmark spent at least one smoky evening with his trigger-happy friend Felipe Rheim).

In 1854, Alexandre built a two-story, cylindrical house with a hut-style roof at the corner of 3rd and Main Streets (which was, at the time, some distance from the pueblo). The house was allegedly inspired by a stone building he had once sighted on the African coast, and Alexandre built it for his new bride, Maria Valdez. (Alexandre used adobe instead of stone, as adobe was far more readily available at the time.)

Madame Alexandre wasn't impressed by her husband's architectural flight of fancy. (Given that this highly unusual house, inspired by an exotic location, was built roughly 80 years before storybook style came to Los Angeles, I feel comfortable calling it Southern California's earliest known example of fantasy architecture.)

Alexandre sold the Roundhouse to German-born George Lehman. In 1856, Lehman converted the house and its grounds into LA's first amusement park, The Garden of Paradise.

The Garden of Paradise was essentially a family-friendly beer garden that boasted a plethora of exotic plants, live music, and games for children. For over twenty years, it was a very popular Sunday destination. Lehman eventually added the wood paneling that gave the house its later octagonal look. Harris Newmark recalled that prickly pear cacti bordered the Roundhouse's gardens, and visitors freely picked the bright pink fruit.

On July 4, 1876, the Roundhouse hosted a centennial celebration for 3,000 people. Southern California's first large-scale parade began at the wool mills on Aliso Street and ended at the Roundhouse's grand party, featuring a French Benevolent Society chariot. One of the celebration's four marshals was Eugene Meyer, an accomplished Frenchman we'll meet again later.

Unfortunately for George Lehman, he accumulated debts he couldn't pay and lost the Roundhouse to foreclosure. The building was re-purposed as a schoolhouse, and Southern California's first kindergarten classes were taught there. Incidentally, Kate Douglas Wiggin (author of Rebecca of Sunnybrook Farm) trained as a kindergarten teacher at the former Roundhouse.

Raymond Alexandre's unique African/Spanish house was torn down in 1889. Today, the site is largely occupied by government buildings.
Posted by C.C. de Vere at 12:11 AM No comments: