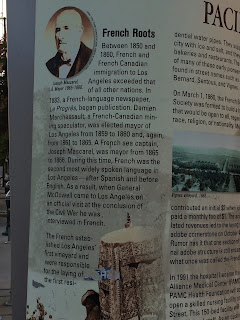 Joseph Mascarel was born in the French seaport of Marseille on April 1, 1816. At the tender age of 8 (that's not a typo), he first glimpsed the port of San Pedro while serving as a cabin boy. Legend has it that he swore to one day live in California.

In 1827, 11-year-old Joseph was a cadet on the Jeannette, bound for Hawaii and Tahiti. The Jeannette made a stop in San Pedro, where one of the passengers - Jean-Louis Vignes - did some trading in port before the ship left for Hawaii. (It isn't clear if Vignes and Mascarel became acquainted on this voyage.)

Mascarel continued to sail around the world, working on ships and trading on the side. By 1844, he had saved enough money to buy the Jeannette. Mascarel, now 28 and the ship's captain, sailed his ship back to San Pedro, sold it, and bought an entire city block with the profits. (Specifically, Main to Los Angeles Streets at Commercial Street - on the northern edge of the original Frenchtown.) He also purchased forty acres of farmland in modern-day Hollywood, north of Gower Street, and grew tomatoes. (It's so funny to think of tomato plants growing along Gower Street today.) Mascarel lived in an old adobe house on Main Street for many years, but don't bother looking for it today...the corner where it once stood is now (drumroll please...) a parking lot adjoining Olvera Street. (The sheer number of Frenchtown sites that have since become parking lots is really beginning to depress me. But I digress.)

Mascarel was accompanied by a friend from Marseille - M. Lemontour. In fact, Mascarel had assisted Lemontour with travel expenses. Lemontour worked for Mascarel until he had paid him back, then moved on to Mexico City (Los Angeles, still a small and sleepy pueblo, wasn't as exciting as Lemontour liked). Many years later, Lemontour had become a wealthy Mexican official, and he met up with his old friend Mascarel to catch up and trade stories.

Although there was a growing French community by 1844, the vast majority of Angelenos were Mexican or Spanish. Mascarel - who was one of the few Caucasians to settle in Sonora Town - learned to speak Spanish fluently and was soon dubbed "Don José" by his neighbors. He also became a part owner of Los Angeles' first bakery (Angelenos weren't paranoid about carbs yet). Before too long, he was in the wine industry, got into mining, and distributed lime. A Chatsworth History program states that in 1845, he worked for Jean-Louis Vignes as a cooper.

In spite of his gruff, stern exterior and imposing presence (he was over six feet tall and weighed about 200 pounds - enormous for a Frenchman), Mascarel was a decent and generous man, and became a very popular local figure.

Mascarel got into some trouble in 1847. California was still part of Mexico, and Mascarel was one of a band of volunteer soldiers supporting the United States. The volunteers were captured and detained at Rancho Los Cerritos (i.e. modern-day Long Beach). However, they were in luck: their host was Don Juan Temple, an Anglo settler who had been appointed alcalde (mayor) of Los Angeles by Commodore Stockton. Temple responded by bringing two barrels of wine to Rancho Los Cerritos, plus his family for company, to ease the volunteers' "captivity". Needless to say, a good time was had by all.

The volunteers had to promise not to bear arms against the Californios in order to secure their release. Mascarel and Louis Robidoux (founder of Jurupa/Riverside) decided to obey the letter of their promise rather than its spirit. Robidoux supplied General Frémont's troops with flour from his grist mill, and Mascarel provided vegetables and livestock.

Supporting the United States was a potentially risky endeavor for Mascarel. His new bride, Serilda Lugo, was related to a prominent Californio family - the Alvarados of San Juan Capistrano. (Records disagree on whether Serilda was Native American, Spanish, or mixed race.) I have yet to find any reference to Mascarel having trouble with his in-laws, but the couple got along well enough to have eight children.

In 1853, Mascarel decided to visit France. He took $40,000 with him (about $1.2 million today) and left Serilda behind to manage his business (besides wine, farming, and mining, he was an avid investor and speculator). Mysteriously, Mascarel needed Serilda to send money for his return trip three years later. To this day, no one knows how Mascarel managed to lose such a large amount of money (my best guess would be a bad investment). Fortunately, Serilda was more than capable of managing Mascarel's business interests on her own.

In 1861, Mascarel and a business partner constructed a block of buildings along the south side of Commercial Street between Main and Los Angeles Street. The Mascarel-Barri block, which replaced several crumbling adobe buildings, was divided in 1865.

Another Frenchman, Damien Marchesseault, had served several terms as Mayor. His re-election streak was broken only by Joseph Mascarel, who served as Mayor from 1865-1866.

Mascarel was a very tough mayor. He responded to the city's abysmally high rate of violent crime by banning residents from carrying any weapons whatsoever (even slingshots were prohibited). This wasn't his most popular move (LA was still the Wild West), but Mascarel was often credited with maintaining order in a divided Los Angeles. Although California was a Union state, many of Los Angeles' white inhabitants were Southerners, the city leaned Confederate (read Los Angeles in Civil War Days if you don't believe me), and the Civil War was raging. Keeping the peace with a populace divided over a highly contentious war is quite a task.

Mascarel was held in high esteem by French, Spanish, and Mexican Angelenos. However, the growing Anglo minority took issue with Mascarel's inability to speak English. In fact, the April 23, 1866 edition of the Los Angeles Weekly News included a savage classified ad: "Wanted. A Candidate for Mayor who can read and speak the English language, by Many Citizens." (This may not have been an entirely fair demand, considering that the vast majority of Angelenos were native Spanish speakers, French was the second most common language, and English would remain a distant third for some time.)

Still, Mascarel's political career wasn't quite over. He was popular enough to be elected to the City Council seven times between 1867 and 1881. In later years, he would lend support to others who ran for office.

While serving as Mayor, Mascarel signed a significant land grant to the Pioneer Oil Company, the first of Southern California's many oil companies. (One of Pioneer's organizers was Charles Ducommun, a Francophone Swiss watchmaker we'll meet again later.)

According to an account by Horace Bell, Mascarel quietly kept a close eye on Mayor Joel Turner and the City Council. He dutifully reported their corrupt dealings, which included interfering with the water system, to the Grand Jury, which promptly indicted Turner and the councilmen. Turner was sentenced to ten years in prison. He never served a day of his sentence (can't win them all), but control over the Los Angeles River was taken out of the Mayor's hands and given back to the water commissioners. (Good thing, too - in those days, Angelenos were still raising crops and livestock. The city could easily have lost most of its food sources.)

In 1871, Mascarel helped to found the Farmers' and Merchants' Bank, serving as one of its trustees (by this time, the city directory listed his occupation as "capitalist"). According to an old newspaper obituary for one of Mascarel's granddaughters, he owned a cannon (courtesy of the Mexican-American War) and placed it at the corner where the first Farmers' and Merchants' Bank originally stood. This cannon was later moved to Exposition Park.

Serilda Lugo Mascarel passed away in 1887. Mascarel and his family soon took out an ad in the newspaper thanking their friends and acquaintances for their kindness and support.

It isn't clear when Joseph Mascarel met his second wife, Maria Jesus Benita Feliz. Nor is it clear when they moved in together and began their common-law marriage. But we do know that they didn't legally marry until 1896 (Mascarel's children with Serilda vocally opposed the marriage and son-in-law J. P. Goytino successfully blocked issuance of a marriage license). Maria had been very ill, and the belated marriage ceremony was carried out in the Catholic Church (a license was not necessary in this case). A Los Angeles Times article published just two days later stated that the 80-year-old former mayor and his 60-year-old bride had been "for all intents and purposes" living as a married couple for thirty years and had several adult children. This very likely means that Joseph and Serilda chose to separate in or before 1866. (Believe it or not, there was a time when divorce was rare in LA.) The 1870 federal census indicates that Serilda and her seven surviving children were no longer living with Joseph.

I should note that Mascarel was one of the wealthiest men in Los Angeles at the time. In spite of his penchant for quietly donating large sums of money to charitable causes, he was worth over a million dollars (and in 1896, that was a LOT of money). The Times noted that Goytino opposed the marriage due to concerns over inheritance of property. (In some ways, LA hasn't changed all that much.)

Joseph Mascarel died of heart failure on October 6, 1899, at his home on Lazard (now Ducommun) Street. He was 83 years old. Mascarel left behind Maria, children from both wives, grandchildren from his first marriage, and the remainder of his fortune. (The bulk of this money was willed to Mascarel's grandchildren from his marriage to Serilda. Maria's children promptly contested the will.) Mascarel had owned land in four counties, but began to give it away to to friends and loved ones in his later years. A solemn high mass was held at the Old Plaza Church in his honor.

Joseph Mascarel is buried at Calvary Cemetery. His headstone lists his first name as "José". The headstone is otherwise in English - ironic, given that he neither spoke nor read the language.

A Los Angeles Daily Herald article from 1889 states "Everybody knows who Jose Mascarel is, as as he lacks but little of being one of the oldest settlers of this city." Today, he has faded from LA's collective memory. A street was named for the former mayor and investor, but it is misspelled as "Mascarell Street."
Posted by C.C. de Vere at 3:17 AM