It may seem odd to some of my readers that the Natural History Museum of Los Angeles County would have, let alone display, anything related to the city's French community. The words "Natural History Museum" tend to conjure up images of rocks, dinosaur bones, and dioramas of taxidermy wildlife. (Yes, the museum has plenty of those things too, but that's beside the point.)

When it opened in 1913, the Natural History Museum of Los Angeles County was named the Museum of History, Science, and Art (Le Guide calls it "our County Museum", and I'm sure I don't need to point out that Los Angeles' population was about the same size as Anaheim's is today). The museum's art department spun off into the Los Angeles County Museum of Art (LACMA) and moved to Wilshire Boulevard in 1965. Today, the Museum's emphasis is firmly on science, but our history remains - in the "Becoming Los Angeles" exhibit.

And there are some nice surprises in store for French Angelenos.

The father of French migration to California used this brandy still and strainer. They're intact (if slightly battered) and safe in a glass case. I'm amazed these humble items survived when so much of our history has been demolished, paved over, renamed, or actively erased.


Charles Ducommun was a half-blind smallpox survivor when he loaded up a donkey with as much as it could carry and WALKED from Arkansas to California, with this shotgun for protection. Incredibly, in spite of his reduced eyesight, the Swiss-born, French-speaking Ducommun continued to ply his trade as a watchmaker, opening a combination jewelry/hardware store. Ducommun's store grew into Ducommun Industries, a defense/aerospace supplier and California's oldest corporation.

I can't even tell you how much time I spent staring into that case, in awe of the fact that California's oldest corporation began with that tiny set of jeweler's scales.

Jean-Louis Sainsevain and the ill-fated Mayor Damien Marchesseault tried to solve LA's water problems with pipes made from hollow logs. It backfired horribly (over and over...), but at least their struggle is remembered in the Museum. (The artifact information doesn't list them by name, but at least there's a surviving log pipe on display. And if you're reading this blog, you probably already know I'm used to this sort of thing. Still...this would make a GREAT segment on Mysteries at the Museum.)

In the 1950s, Henri Penelon's granddaughter took two of his paintings to the Museum to donate them.  Less than a century after his death, no one at the Museum had any idea who he was. I can only imagine how badly that must have stung.

Today, the Museum's Seaver Center for Western History Research owns thirteen of Penelon's surviving paintings. I wasn't expecting to see any of them on display and yet...there they were!
I have yet to visit the Seaver Center, but will be reaching out to them to do further research.

Few people realize that Walt Disney had French ancestry. "Disney" is a corruption of "D'Isigny", after Isigny-sur-Mer in Normandy. I have never considered it a coincidence that Disney's Los Feliz home was influenced by traditional Norman architecture.

And then there's the city model.

Built in the 1930s as a WPA project, the model is an amazing tool for seeing what downtown looked like before freeways sliced right through Frenchtown (and a couple of Beaudry tracts). 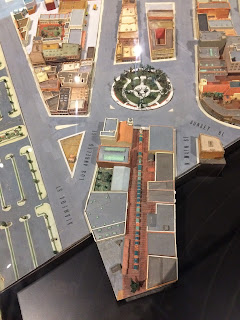 Do note that the street we now call "Paseo de la Plaza" was labeled "Sunset Boulevard" on the model. You read it here first: Marchesseault Street was (at one point) renamed Sunset Boulevard.

Sadly not on display: a portrait of Therese Bry Henriot, who emigrated from French-speaking Switzerland, married a French-born gardener, and established LA's first French-language private school. (Le Guide makes reference to Mme. Henriot's portrait hanging in the Museum. I can only presume it was moved to storage long ago.)

Nonetheless...can you imagine the tears of joy that seeing this exhibit brought to this French/Quebecois/Anglo-Norman Angeleno's eyes? (Who am I kidding? I'm crying as I write this.) For the first time in my life, I felt represented and acknowledged in my hometown. I have argued that we deserve our own museum (and my position on the matter isn't going to change), but just for one afternoon, it was as if the city had tapped my shoulder and whispered into my ear "I hear you".
Posted by C.C. de Vere at 12:56 AM