I was shocked and dismayed to hear from my pals at Esotouric that the landmarked 1887 Gless farmhouse just flipped. I had to see it to believe it.

When I wrote about Simon Gless 22 months ago, the house had been a boarding house for many years.

The story of the Gless farmhouse is the story of Boyle Heights in a nutshell: a well-to-do French Basque family's farmhouse, then for a number of years the Hebrew Shelter Home and Asylum, then divided into apartments and lived in by mariachi musicians (the house is spitting distance from Mariachi Plaza).

Boyle Heights residents have been fighting back against gentrification for years (listen to Smoke Screen: The Sellout). But it’s very hard to fight against opportunists with deep pockets (especially if they play a little too nicely with City Hall).

The Gless house, long lived in by low-income renters, has most recently been operating as a hotel. Where are the tenants? Where could they realistically afford to go, with rents spiking in Boyle Heights and neighborhoods like it? 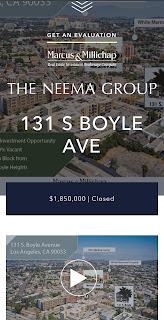 The house, listed as an “investment opportunity”, has now sold for over $1.8 million. Whoever bought it may very well intend to make a lot more than that.

I am very worried about this house. Yes, it was landmarked (Boyle Heights residents pushed to landmark several buildings in the neighborhood to guard against developers tearing them down). But landmarking isn’t enough to save a building. In Los Angeles, landmarking a building doesn’t actually prevent demolition. It adds a couple of extra requirements and allows the city to delay demolition for up to a year. That’s IT. Landmarks can indeed be demolished, and sometimes, it does happen.

Don’t get me started on the fact that illegal demolition takes place on an all-too-frequent basis in LA, with the perpetrators almost always going unpunished. It’s entirely possible that a bulldozer will just show up one day, sans permit, and knock down the house, with zero consequences for anyone involved.

The Gless house, therefore, could very well be demolished and replaced. I doubt the largely working-class people of Boyle Heights will be able to afford to live in whatever might replace it.

Do I even need to comment on the house formerly being billed as “Mariachi Plaza Hotel” when whoever turned it into a hotel displaced mariachis to do so? (There’s a reason one of the characters on Netflix’s series “Gentefied” is a mariachi living in a van with his young son, unable to find an affordable apartment.)

Does anyone out there know Sharon Gless or her management team? Sharon is Simon Gless’ great-granddaughter and had a hand in getting the house landmarked in the first place.