For the next few minutes, try to imagine getting a bad coffee craving in LA's early days.

There was no Intelligentsia, no Stumptown, no Coffee Commissary, no Cognoscenti, no Demitasse - hell, there wouldn't even be any Peet's or Starbucks for well over a century!

LA needed coffee. The young city's large French community especially needed coffee (God only knows how much the French have loved coffee since the early 1600s...).

In 1869, it appeared LA's prayers for caffeine had been answered. Newly-arrived French expat Joseph Joly, a cheerful fellow who quickly earned the nickname "Jolly Joseph", opened the Chartres Coffee Factory on Main Street, opposite the Plaza, in 1869.

Chartres Coffee Factory was a combination wholesale and retail coffee shop. Grocers could buy coffee, but so could the public. It was Southern California's first-ever coffee shop (which probably makes Joly LA's first barista).

It didn't take long for Joly to disappear one day, leaving behind a stack of unpaid bills (and, presumably, the strong scent of French-roasted coffee beans). LA's first coffee shop owner was also one of its earliest con artists.

(Hey, I could omit the unsavory stories. But I don't believe in hiding the truth from my readers.)
Posted by C.C. de Vere at 2:32 AM No comments:

Joan of Arc in Chinatown: A Brief History of Los Angeles' French Hospital 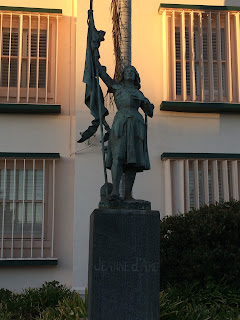 The first hospital in Los Angeles, St. Vincent's, was (and still is) a Catholic hospital. Which, given the city's Spanish roots and large numbers of Catholic Frenchmen in early LA, isn't surprising.

However, by the late 1850s, LA was becoming a little more diverse. Growing numbers of Protestants began to arrive, requiring the founding of the Los Angeles Unified School District in 1853 (before that, only Catholic schools existed, in spite of California becoming a state in 1848). Jewish newcomers (most of them German or French) also began to arrive.

People of all faiths need medical care. The Daughters of Charity, to their great credit, never turned away a patient in need, but the town was growing, and St. Vincent's only had so much space. The French community decided to see to its own needs. On March 1, 1860, thirty-three Frenchmen (and two Italians) met at the French Consulate, under the invitation of French consul Jacques Antoine Moerenhaut (remember the name Moerenhaut; you'll be reading a very long entry about him later).

The group decided to form a non-sectarian mutual protective association - predating the concept of an HMO - and named it the French Benevolent Society. Members contributed $2.00 each to the treasury (monthly dues were $1.00) and elected a nine-member executive committee responsible for creating the Society's constitution.

The Executive Committee elected its officers as following:

Dr. Lacharmois was named the Society's first medical official. Initially, he worked out of an office in a house on Hill Street.

The Society elected a nine-member board each and every year. For many years, Jean Sentous was the Society's president; his son Louis Sentous Jr. held several offices in the Society and was its president for thirteen years (during his tenure, membership more than doubled).

Regular readers may recall that Michel Lachenais' first murder took place at a wake, when (after the mourners had been drinking for several hours) he got into a fight with Henri Deleval over whether the recently-founded Society had adequately cared for the deceased.

The Society also soon had a parcel at the old City Cemetery for burials. (Beret-tip to Richard Schave for the link.)

By 1861, the Society decided non-French (and non-Italian) Angelenos could see Dr. Lacharmois as well. Los Angeles was still a very dangerous place (so much so that Frenchtown was protected by a unit of the French Foreign Legion!), and there weren't many medical professionals in town. This decision, in effect, created a healthcare safety net for area residents who may not necessarily have preferred St. Vincent's.

Any extra money in the Society's treasury was earmarked for the purchase of land and construction of a hospital. In spite of the expense of tending to sick or injured Frenchmen (and in some cases burying them as well), the treasury had $5,000 within the decade.

On October 4, 1869, the Society gathered at the corner of College and Castelar Streets and walked to the building site, where the cornerstone of the French Hospital - the first public hospital in Los Angeles - was laid with appropriate ceremony.

By March of 1870, only the hospital's second story and roof remained unfinished. At the semi-annual March meeting, it was discovered that the building fund had run out of money. This was quite upsetting to members, who wanted the hospital open but did not want to go into debt.

The Society made the best of the situation by equipping the completed ground floor and opening the hospital in its unfinished state (perhaps rationalizing that they could finish it later, since bad weather is so infrequent in Southern California). M. Sarlangue was appointed caretaker, with a different French couple overseeing housekeeping and nursing. Sure enough, the Society soon managed to raise the rest of the money and finish the hospital.

In 1876, Dr. Hubert Nadeau (no relation to "Crazy Remi" Nadeau) arrived in Los Angeles, taking employment at the French Hospital. The well-liked doctor also served as county coroner from 1879 to 1884, when he became Chief of Dispensary Clinics and Professor at the University of Southern California. He was also President of the County Medical Association. (Los Angeles boasts a Nadeau Street and a Nadeau Drive, but it isn't clear if either street is named after Remi or the good doctor.)

The French Hospital began accepting Chinese patients in the early 1900s. It is, perhaps, not surprising that the hospital is now surrounded by Chinatown.

Originally a modest adobe building, the French Hospital soon had a wood-framed front house where the nurses lived. The hospital was expanded in 1926. Supposedly, part of the original adobe building is encased within the walls of the newer hospital building. (What I wouldn't give to find out what happened to the original cornerstone...but I'm not about to go poking around an active hospital facility on private property.)

In 1985, the French Hospital celebrated its 125th anniversary with a party including a six-foot cake, pinatas, Chinese lions, and a presentation by then-Mayor Tom Bradley. By this point, admission pamphlets were printed in English, Spanish, Chinese, and Vietnamese - but not French - and the hospital staff spoke 25 languages.

In 1987, a multimillion-dollar expansion of the French Hospital was approved. Unfortunately, a year later, excessive unpaid medical bills forced the hospital (along with several others, i.e. Linda Vista) to cut back on emergency services.

Within a year, local doctors in Chinatown, with help from a Japanese entrepreneur, sought to save and expand the French Hospital. Since 1989, it has been known as the Pacific Alliance Medical Center, and is still an active hospital (the hospital remained open continuously when it changed hands). Today, most of the patients are Asian; there are also sizable numbers of Latino and African-American patients.

The Jeanne d'Arc statue erected in 1964 stands outside the hospital to this day. Nearby is an Angels Walk stanchion with a brief overview of the history of the French community and the birth of Chinatown. 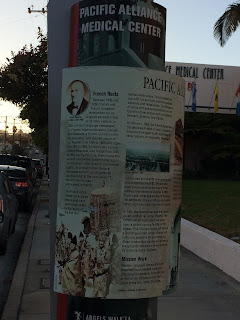 The city of Los Angeles just voted to landmark the Japanese Hospital in Boyle Heights. Would anyone like to help me convince the City Council to landmark the French Hospital too?
Posted by C.C. de Vere at 4:16 PM No comments: