Recently I was fortunate to be introduced to Jan Gabrielson, who visited the original Taix as a child and generously gave me permission to share some vintage photos.

Born in San Francisco, Jan has lived in LA since the tender age of 18 months. Jan grew up in South San Gabriel/Rosemead, currently resides in Cheviot Hills, and is a retired family lawyer and legal consultant who practiced downtown.

Jan started going to Taix in the early 50s as a child and went two or three times. Jan states “I remember going there and knowing I had been there before.” 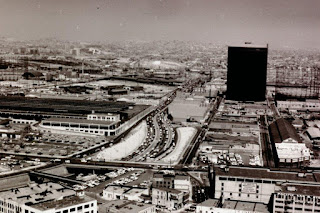 This 1961 photo, which Jan took from the City Hall observation deck, shows Taix in the very bottom center.
Jan describes the lost building at 321 Commercial Street as "a shabby old industrial building with more than 1 floor" and remembers sitting with family at a long table (communal seating was the norm, although private booths were available for a little extra).

Jan's mother, a Home Economics teacher who had taken a college French class, insisted on the incorrect “tay” pronunciation and was unimpressed. Jan notes “she had no language talent whatsoever, but that didn’t stop her” from teaching Spanish at the family's dinner table.

In fact, there was a running battle with Jan's mother over how to pronounce Taix. Jan opines “it’s the family name and that’s how they pronounce it, end of story”. Jan also ran through a list of place names that ignore the X rule. (In French, pronunciation rules don't necessarily apply to names - of people or of places.)

Jan recalls coffee being served at the very end of the meal. The waiter would say “put your spoon in your glass” - to prevent the glass from shattering when the hot coffee was poured in. (Metal is an excellent conductor of heat, so this makes sense. That said, I studied art, not science.)

Jan went on to UCLA, majored in French (despite never having spoken French before!), and spent a year abroad in Bordeaux. By this time, due to UCLA's excellent language program, Jan was already fully fluent in French.

Jan also worked as a passenger service agent for Air France. At the time, according to Jan, French visitors didn't spend much time in LA. They would visit Disneyland and Marineland, then go to San Francisco. 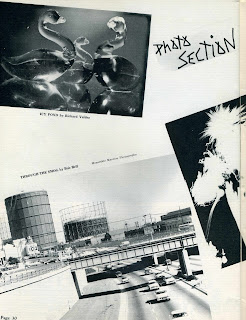 This photo showing the 101 Freeway also shows the former Brew 102 brewery. Which was formerly the Maier Brewing Company and the Philadelphia Brewery before that... and the El Aliso vineyard and winery before that.

In the late 1970s or early 1980s, Jan became aware that there was a newer Taix location on Sunset Boulevard and began going there. Undeterred by the higher crime rate in Echo Park, Jan would sometimes go frequently (and sometimes less so), and often met friends with season tickets at the restaurant.

Jan recalls cheese grinders cranking fresh Parmesan into the restaurant's famous tureens of soup and calls the potato leek soup with Parmesan and pepper “one of the great joys of life”.

Jan may have been Sunset Taix’s last dine-in customer, since Mayor Garcetti shut down restaurants during Jan's last visit. (Guests already dining in were permitted to finish their meals.)

Here's hoping there will be many. many more evenings at Taix when the pandemic ends.

Email ThisBlogThis!Share to TwitterShare to FacebookShare to Pinterest
Labels: Taix

Félix and Jules Violé happened to be visiting their cousin in Bayonne when they encountered something unexpected: a copy of Le Progrés.

Founded in 1883, Le Progrés was one of 19th-century LA's French-language newspapers (there were at least four, and there is some evidence that there may have been as many as ten). Le Progrés was politically independent and a popular newspaper, despite strong competition from rival paper L'Union Nouvelle (which lasted until well into the twentieth century). And a relative in Los Angeles had sent an issue of the newspaper to the Violé brothers' cousin.

A busy frontier city in the furthest reaches of the faraway American West had so many French expats that it had its own French-language newspaper - more than one, in fact. The very idea intrigued both brothers (who had little to look forward to besides modest success and a comparatively dull life). Félix decided to pack up and move to Los Angeles himself. (Jules would follow him to LA within a year. I will cover him in a separate entry.)

Interestingly, immigration records indicate that Félix entered the United States through another great city with French roots - New Orleans. The year was 1888, and Félix was 30 years old.

Félix quickly settled into his adopted city. He was a civil engineer by training, but as the boom of 1887 was over (thus meaning little work for engineers), he took a job with hotelier Pascale Ballade - the very relative who had sent the copy of Le Progrés to Bayonne in the first place. Soon, Félix became editor of a different local French-language newspaper, Le Gaulois, and served on the committee for the Bastille Day centennial celebration.

I've covered the Bastille Day celebration earlier, in my entry on Georges Le Mesnager. In a strange footnote to one of the biggest events Frenchtown ever hosted, there was a dispute over payment of a bill connected to the celebration. Félix was slated to duel with Charles Raskin, then-editor of Le Progrés, over the issue on September 5, 1889. Strangely, about a year later, Félix was listed as editor of Le Progrés (a position he would hold for two years) and Raskin as editor of Le Gaulois in different newspaper articles. I surmise the issue prompting the duel was solved in a nonlethal manner.

Félix and Hortense had three children - Gabrielle, Marie, and Laurence. Sadly, Gabrielle only lived for 18 months.

Félix also had a wholesale wine and liquor business, along with his house, at 736 S. Spring Street (a block I know well, having been to 721 S. Spring Street, aka California Millinery Supply, plenty of times). Los Angeles did have some restrictions on alcohol sales by the 1890s, and Félix was fined $20 for selling liquor after hours in 1893.

Two years later, Félix applied for a saloon license and was denied. It isn't clear whether this had anything to do with the 1893 fine - or with the French newspapers' strong opposition to the French gangsters who ran many of the saloons and brothels in neighboring Lil Paree. (Beret-tip to David Kimbrough for the clipping.)

Félix also worked as a surveyor, was the city's official draftsman until his death, ran for City Engineer, and incorporated the Félix Violé Map and Address Company. Félix compiled new maps of Los Angeles said to be the most detailed and complete to date, one of which was distributed free of charge through the city's Chamber of Commerce. If you've ever seen a map of Los Angeles produced in the 1900s-1910s (or a real estate directory), it was probably made by Félix.

Félix was active in the Knights of Columbus, and was an avid clarinetist. Laurence Violé also became a civil engineer, sharing office space with his father at 2nd and Main.

Félix passed away in 1924 and is buried at Calvary Cemetery.