Moving on to another of LA's older neighborhoods...

The French community was, as I've noted previously, originally concentrated in an area that is now split between Little Tokyo and the old industrial core. But as newcomers continued to arrive from France, the neighborhood grew...into what is now part of Chinatown. 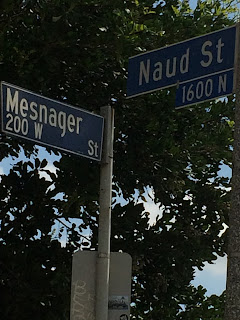 Not too far from Bauchet Street, Mesnager Street intersects with Naud Street. 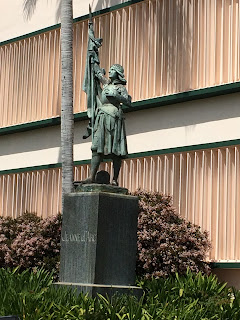 Joan of Arc, erected in 1964, still stands proud outside the old French Hospital. 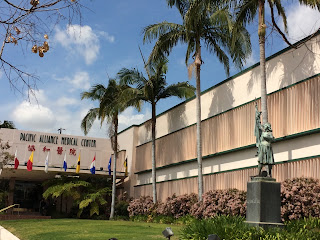 The French Hospital, founded in 1869 by the French Benevolent Society, still exists. The original adobe building and wood-framed nurses' dormitory were replaced long ago. (A portion of the original hospital is rumored to be entombed somewhere inside the hospital's walls.) 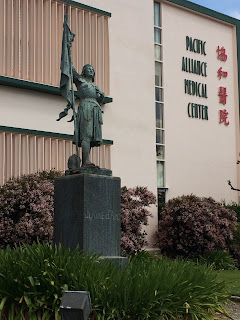 Poor Joan almost seems lost outside the modern-day Pacific Alliance Medical Center, as the French Hospital has been known since 1989. 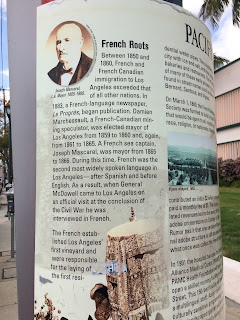 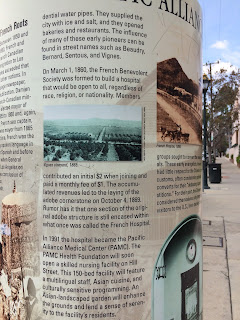 A very brief history of the hospital - and references to our names appearing on many of LA's street signs. 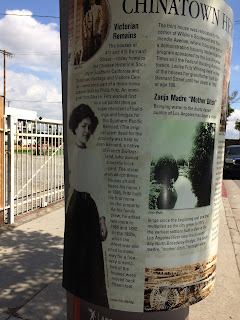 What's this? Another Angels Walk stanchion? 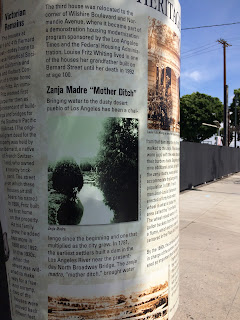 Note references to the Fritz houses. Philippe Fritz, a carpenter from Alsace-Lorraine, built three houses next to each other for his family. One house was later moved to Wilshire and Normandie (and is, of course, no longer there, either). 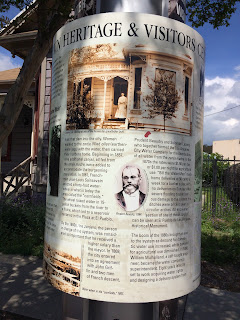 Same stanchion, outside the Chinatown Heritage and Visitors Center. Look, it's Mayor Beaudry! 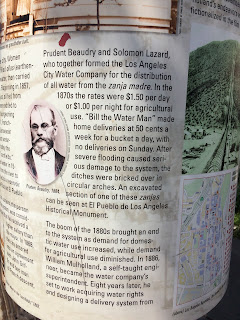 More on the water system. Until well into the twentieth century, French Angelenos were instrumental in bringing water to Los Angeles residents. 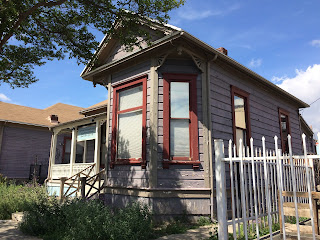 One of the Fritz houses. 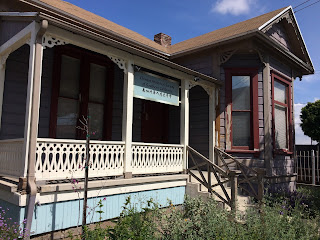 Another angle on the same house. (No self-respecting French homeowner would ever let the paint peel that much. Just saying.) 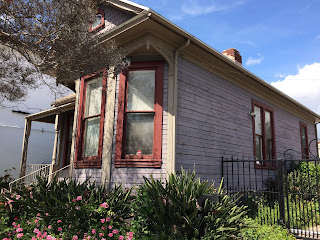 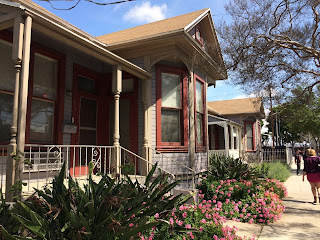 Another angle on the second house. I suspect the railing was added later. While my people are quite fond of lacy ironwork, this doesn't look original or consistent with the first house. 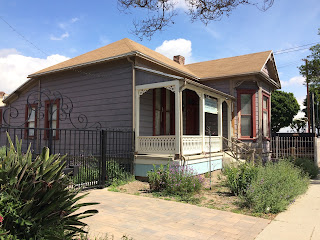 A wider angle on the first house. Now this is the home of a carpenter. 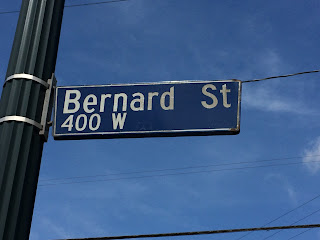 And where are the Fritz houses? Bernard Street! Jean Bernard held a grant deed for this part of town, and ran a brickyard nearby.

Edited to add (7/1/17): If you've seen La La Land, you've seen Bernard Street - sort of. In the scene with Mia leaving a voicemail for Sebastian, she does walk down Bernard Street (you can see the street sign and the Chinese-themed motel on the corner). Mia is walking opposite the Fritz houses. It's such a wasted opportunity to show another aspect of LA's culture and charm, but sadly, French Angelenos receive little to no representation anywhere (let alone in an Oscar-winning film).
Posted by C.C. de Vere at 8:54 PM 2 comments:

The acknowledged foremost authority on Frenchtown, Helene Demeestre, has called at least one of her Frenchtown lectures "Without a Trace".

With all due respect to Dr. Demeestre, if you can't find traces of Frenchtown in modern-day Los Angeles, you haven't looked hard enough by a LONG shot.

Recently, I was fortunate to get a Saturday off work and spent it exploring the old Pueblo and nearby Chinatown. This is what you'll find if you make the same trip.

Damien Marchesseault, progressive six-term mayor, is remembered in a plaque outside the Biscailuz building. (Am I alone in thinking it's weird that the plaque is in English and Spanish, but seems to be missing a French translation?) The inscription references the nearest street being named after Marchesseault, which it was. However (insult to injury here), Marchesseault Street was renamed Paseo de la Plaza sometime after this plaque was installed. Oh, and the dates of his mayoral terms are highly inaccurate. (Even in death, Marchesseault gets no respect.)

And now...prepare for the shock of a lifetime.

As of this writing, if you visit the old Avila Adobe on Olvera Street, you just might stumble upon something unexpected...

...an exhibit about the struggle for water services in early LA.

I had no idea it was even there. It's not advertised, and most of it is gated off. But the first part, which concerns the Sainsevains, Beaudrys, Solomon Lazard, Mayor Marchesseault (etc.), was open.


So as you can see...we haven't really vanished "without a trace", as Dr. Demeestre puts it. There is a wealth of clues. You just have to spend some time looking for them.
Posted by C.C. de Vere at 10:17 PM 2 comments: