BREAKING NEWS: El Aliso Vineyard was NOT on the site of Union Station!

Most sources - including older ones - state that Jean-Louis Vignes' vineyard, El Aliso, was "about where Union Station is today."

Here's the problem with that statement: it wasn't.

A Gizmodo post by historian Nathan Masters mentions the former location of the giant sycamore tree that gave the vineyard its name. According to landscape architect John Crandell (who according to Masters has researched the matter extensively), if the tree were still standing today, it would be here, growing out of a raised island separating the Vignes Street onramp from the 101 freeway.

For months, I tried and failed to find a boundary map for El Aliso. I knew it was along Aliso Street, and (of course) the 101 Freeway arrived roughly a century after Vignes did. Using the river as a reference was completely out of the question - the LA River shifted its course due to severe flooding, and has since been rerouted by the Army Corps of Engineers. I reasoned that the freeway, which separates the former core of Frenchtown from Union Station, had simply cut through Vignes' property - 104 acres IS a good-sized chunk of land, after all.

The other day, James Lawson, a seventh-generation Californian (and descendant of the Reyes, Alanis, and Casenave families) reached out to me with a LOT of information to share. This information included an 1849 map of LA showing property boundaries and an 1869 map of the Alanis vineyard tract.

James - who just so happens to be an urban planner - walked me through his research into the location. Basically, Aliso Street's transition into Commercial Street corresponds closely to (now-gone) Labory Lane, which was originally the access path from Alameda Street to the Alanis property - surrounded on three sides by Vignes' land.

Flip the 1849 Ord survey to correctly point north, layer it over the modern street grid using the former Labory Lane as a reference, trim away most of the surrounding properties to better see modern LA's streets, and you get this: 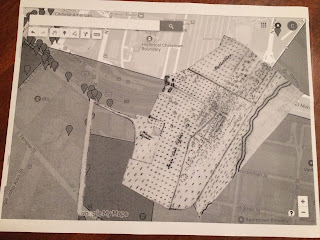 (Yes, I had to print these out and play cut-and-paste. I don't have, let alone know how to use, Photoshop. I should note that the 1849 map printed out a little too big - it's not easy to match the scales on two old maps, with no scale given on either - let alone on an uncooperative 8-year-old laptop.)

This location also makes more sense than Union Station. The giant tree still fits into the property's footprint, we can clearly see Aliso Street in reference to the property, and the property's true location explains why Vignes Street is so far south of Union Station. The (admittedly approximated - and now I have to re-draw it) shaded area to the right, representing the Ballesteros Tract, supports this location - the Ballesteros family, as you can see, owned land right next door to Vignes.

I live for "OH MY GOD" moments like this.